Stress can be observed within minutes of using the phone

As the above graph illustrates, when being exposed to EMFs emitted by a cell-phone that does not carry the BIOPRO Harmonization Technology, the body’s energy level is pushed into unhealthy ranges and a significant stress response can be observed within minutes of starting to use the phone. It takes the body approximately 30 minutes to compensate for (or recover from) harmful effects of being exposed to cell-phone EMFs for a mere 5 minutes.
When the BIOPRO Technology is applied to your cell-phone, energy-levels stay within healthy ranges, the body’s stress response is avoided.

“Under the influence of a BIOPRO chip these pathological shifts of energy levels could not be observed. In fact, with the predominant number of participants (whose energy levels had previously been pushed into unhealthy ranges by cell-phones not carrying the BIOPRO technology), even a leveling back to the standard, healthy range (around 40 SE) could be recognized, so that of a positive effect in the therapeutic sense can be spoken".

*Note: This study was done with an earlier version of the Biopro Cell Chip, before the introduction of MRET technology. These results were acheived using only Energy Resonance Technology.

Research studies from around the world have illustrated that cell phones carry the potential for radiation exposure, creating a myriad of possible health hazards. One such hazard is that microwave radiation emitted by cell-phones has the potential to heat up human tissue in the area of our head where the phone is pressed against. This thermal (heating) effect can cause headaches, fatigue, tissue swelling, tingling and other severe potential long-term damages.

The impact of the BIOPRO Energy Resonance Technology Cell Chip:

To illustrate that BIOPRO's groundbreaking EMF-Harmonization technology (i.e. the BIOPRO Cell Chip) not only measurably avoids the stress-response otherwise present when you are exposed to harmful EMF-radiation but the chips also have the ability to avoid the thermal (heating) effect described above, state-of-the-art Thermographic Imaging was used to illustrate the effectiveness of the BIOPRO technology in harmonizing dangerous radiation. Clinical thermography is a non-invasive, diagnostic imaging procedure involving the detection imaging procedure involving the detection and recording of a patient's skin surface thermal patterns, using instruments which can provide visual and quantitative documentation of these temperature measurements. The interpretation of these temperatures and thermal patterns can be important in the development of diagnostic impression. 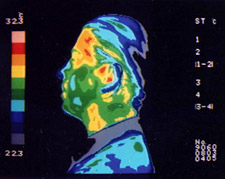 The testing Protocol followed the IACT (International Academy of Clinical Thermology) technique and guidelines. The digital infrared imaging was performed with the Flexi-Therm Mark V Telethermographic System. The thermal window used was 10 degrees Celcius with each color on the color bar representing 1 degree Celcius. The ambient room temperature remained at 20 degrees Celcius throughout the test. A 15 minute equilibration period was used. The purpose of the testing was to determine if there is a change in infrared emission of the body part near a cellular phone with and without the BIOPRO EMF-Harmonization Chips in place.

Results:
As the images below clearly illustrate, when BIOPRO Cell-Chips are applied to a cell-phone, a distinct lessening of the potentially hazardous heat transfer to a cell-phone user's head can be observed when compared to using a cell-phone without the BIOPRO technology on it.

*Note: This study was done with an earlier version of the Biopro Cell Chip, before the introduction of MRET technology. These results were achieved using only Energy Resonance Technology.

The following Blood Microscopy Tests were conducted on September 19, 2006 to test the potential of the BIOPRO BioLife Pendant to act as a body-worn device for maintaining the integrity or normal organization of the human blood cell in the presence of ambient EMF.

Five studies were conducted in San Diego, Toronto, and Melbourne, showing the levels of stress-induced by the normal use of a cell phone. Then the BIOPRO Energy Resonance Technology Cell Chip was applied and the results showed that the same phone and call duration produced far less stress response.

Tailored Nutrition That Brings You Back to Balance